Due to the fact that we have three divisions this year, the Play-Off format will be slightly different as follows;

The Grand Final will consist of the best two group winners (based upon their average points per match ratio).

The 3rd/4th Place Play-Off will involve the remaining group winner PLUS the best runner-up from the 3 groups (again based on the average points per match ratio).

The venue for the Play-Offs have yet to be determined but further details will follow during the course of the season.
Posted by Simon68 at 01:51 No comments:

Following a huge turnout at last nights League Registration event, we are pleased to announce that we have a total of 17 teams for the 2009 season.

The teams have been split into 3 groups, with the Northern area containing one group of 6, whilst the Southern area has a group of 6 and a group of 5. (If Saturdays post contains any late registration, then this team will fill the blank in the group of five).

Following an independent draw, the groups are divided as follows;

There are just 21 HOURS left to get your teams registration in for the 2009 Suffolk Coastal Petanque League.

The fee is just £12 per team (believed to be the cheapest petanque league in the Anglian Region) and you need a minimum of only 4 players.

Everything is shaping up for an exciting season with new teams and venues to play against, so get your forms in or come along to the Registration Night itself on Friday March 27th at Ye Olde Coach & Horses Inn, Melton, near Woodbridge, from 7.30pm onwards.

For more info contact the League at imogenlewiskira@sky.com
Posted by Simon68 at 13:55 No comments: 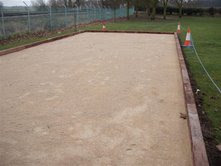 Thanks to funding received from both Suffolk Coastal District Council and Suffolk County Council, we now have a 2-lane piste constructed at Kingston Playing Field in Woodbridge. Built by the same contractor as the existing piste at Bealings, the new piste will have a new team playing on it in time for our forthcoming 2009 season.

It is available for use by anybody and there are both refreshment and toilet facilities located at the pavillion to the left hand side of the playing field.